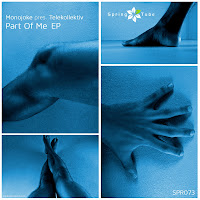 Something of a departure here for Spring Tube, as the Russian label better known for progressive house vibes moves into deep house and nu/cosmic disco territory.

Watching You opens proceedings, a very now-sounding, M1-throbbed slow-burner of a deep house groove. That's followed by Pillow, which opens with a flurry of space-disco stabs then settles down into a midtempo slinkathon –sort of like I imagine listening to D-Train on tranquillisers would sound like – and then finally there's Part Of Me, which starts out like some late 60s freakbeat/psych Hammond nugget before metamorphosing into a big, dramatic cosmic/Italo romp.

About: You can find Spring Tube on Facebook or at their own website.
Posted by Russell at 21:48