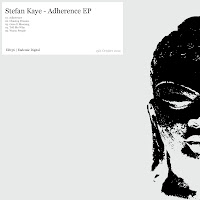 Whoops, nearly overlooked this one… glad I didn't, though, cos it's generally pretty ruddy spiffing, spot-on, tickety-boo, tip-top and other early 20th century expresssions of approbation.

Five tracks make up the EP, and "dreamy deep house aimed at the afterhours joints and post-club sofa sessions" is the general gist. Gave It Meaning is a little more sexy n' sultry than the rest, Warm People a tad more organic and amniotic, but generally speaking yeah, late-night, floataway vibes are the basic order of the day and if such are what you're after then there's not a track here that will disappoint.

In fact, I'd go so far as to say that if you ever locate that mythical bunch of creatures known as "da proper headz," each of them will probably be clutching a copy of the Adherence EP. Nuff said.

About: This comes on a label called Endemic Digital. I believe I may have mentioned them on this blog once or twice before.
Posted by Russell at 20:49