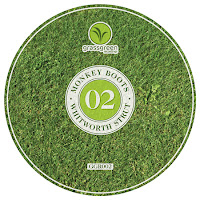 A two-tracker here from New Zealand's Grass Green Recordings – who I don't think have featured on here before – which they describe as "swirling, dramatic disco-inspired house business". Let's have a listen and see if they're right…

Hold Back The Night doesn't have much to do with The Trammps' soul classic of the same name, as far as I can make out, being instead a big, beefy, midpaced dancefloor cut with a heavily treated "in the night/you're gonna find yourself alone girl" vocal sample, that sits somewhere between contemporary-style deep house and nu-disco. Over on the B, meanwhile, you'll find Whitworth Strut, a paean to Manchester's Whitworth Street, home to many famous nightclubs including The Hacienda at one end and the Twisted Wheel/Pips/The State at the other. Aah, memories… anyway yes, the track, which is another mid-paced affair with a suitably loose-limbed, baggy feel.

Overall verdict, then? Well, I'd say 'house-y nu disco' rather than 'disco-inspired house' personally, but you can't fault 'em on "swirling and dramatic"…

About: You can find Grass Green Recordings at their website, on Facebook or on Soundcloud.
Posted by Russell at 16:51