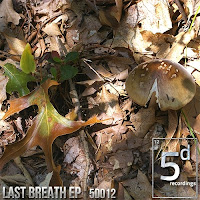 And speaking of labels who are so consistently good that I suspect them of doing it purely to annoy me, here's those infuriatingly ruddy dependable 5 And Dime blighters out of the USA's highest city, Denver (which is in Colorado).

I went to Denver (which is in Colorado) once, but I was only 9. All I remember is that it's the USA's highest city. As in above sea level, I mean. Not that they have the best chronic or anything. I haven't been there since I was 9, how the fuck would I know?

Anyway yeah, more deep house music here. Three tracks in five mixes, ranging from the Loft-flavoured percussion groove of the title track to the live-sounding jazz-funkitude of the Rubberlips Remix of Rise to the psychoactive, tech-tinged throb of the Pleasurewave rub of Time, and if you play them to the right group of people, jigging about may well ensue.

About: 5 And Dime blah blah Denver blah blah but none of them are called John blah blah Soundcloud blah blah Facebook blah blah website stop.
Posted by Russell at 20:42