Farley Silvester - Jam Down Beat Down 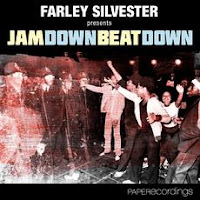 "Acid house survivors" (as they're dubbed on the hype sheet) Terry Farley and Stretch Silvester come to the mighty Paper Recordings.

What's surprising about Jam Down Beat Down is the reggae vocal, which is somewhat remiscent of Earl 16… what's not surprising, given that it's on Paper, is that it sits somewhere between deep house and nu boogie (though they're touting it as 'darkroom garage') and is really rather good.

There's just the two mixes to choose from – Original and Dub, and I think I'm slightly preferring the latter. That's about all I've got to say, really, but do check this one.

About: You can find Paper Recordings on Soundcloud, on Facebook or at their own website.
Posted by Russell at 14:16