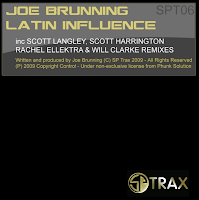 Scott Langley is taking over the world! Someone stop him! Nah, not really, but he and his SP Trax label do have releases coming thick and fast at the minute… so this is just a roundy-uppy type thingy to get ’em all in.

First up, we have Leeroy & Sugarshaker’s Come To Me, which is the latest from SP Trax. This comes in three mixes, labelled Original, Electro and Dirty Tech. No surprise then that it starts at the more poppy, accessible end of the electrohouse spectrum on the Original, then gets a little dirtier and druggier as the mixes go on.

Then also on SP Trax there’s Joe Brunning’s Latin Freedom, the original of which could almost be called Latin Kiss when it starts out, before it introduces a subdued keyboard riff and a “music, music” vocal loop. Rachel Ellektra’s Deep Down Dub captures that mid-’90s Tenaglia/Vasquez kinda vibe, Scott Harrington’s Endemic Dub takes us on a vintage Chi-town trip, while the Scott Langley Freedom Mix and Will Clarke Remix maintain the Balearic-ish stance of the original.

AND FINALLY we have the main event for our purposes to day, which is Inaya Day’s Better Days – the first of several collabs with big name divas coming your way from Mr L soon. Only got the Funk Mix here but it’s good, a tuffer, almost tribally kinda groove. I’d like to have heard more from Ms Day, whose contribution is limited to a couple of looped snippets on this mix, but still.

Out: Now, and there's more on the way.

About: More info on Scott Langley and his world domination enterprises can be found on his MySpace, or the SP Trax MySpace, or better still his actual website, which he runs from a hidden stronghold under the sea.