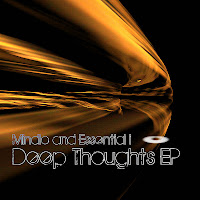 And the good deep house grooves keep on coming… this time in the form of a four-tracker from Next Dimension Music. Like it deep n' dreamy? Then read on…
Deep Thoughts itself is a shuffling, midtempo deep houser with tribal overtones; Liberty and Rhythm Unites are another two percussive, rhthmically-led groovers, but this time with with less of the Afro leanings and more of a late-night feel; and finally there's Secret In You, which is the highlight for me as it's less about the beats and more about the juxtaposition of some lovely sub-aquatic synths with fractured, disembodied snippets of an almost operatic-style vocal. It's a genuinely original and unique-sounding piece of music, and that's quite hard in the world of deep house, so hats off!
Out: Now, through Traxsource.
About: Next Dimension is a digital-only label that's apparently been in business since 2005, but I'll have to confess this is the first time I've come across them. I from Bradford, I know nothing! Anyway the label's run by Joseph Mercado who under various guises has had stuff out on both King Street and (the original) Strictly Rhythm, and they've got a website where you can find out more… but it doesn't seem to have an actual discography so here's their Discogs entry as well.
Meanwhile, Mindlo & Essential I are from South Africa, apparently, but that's about all I know.
Posted by Russell at 22:08