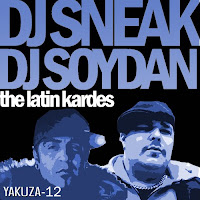 As regular readers will know, I'm not the biggest fan of Latin flavas. But since Carlos Souza AKA DJ Sneak is, y'know, ACTUALLY Puerto Rican, it's a lot less annoying when he does it than, say, some chump from Catford.
So yeah, Latin flavas unsurprisingly abound on this four-tracker, albeit in not too OTT a fashion. Corazon is the most full-on Latin track, Baba mixes up the Latin with some chunky, driving disco-house and an extremely infectious piano hook, but my fave is Ata, which is more your standard Sneak style fucked-up disco, another driving cut that'll take no prisoners on the dancefloor.
Out: Now
About: This is on Yakuza Recordings, who despite being named after a Japanese organised crime syndicate are actually based in Waterford, Ireland. The label is in fact run (partly) by DJ Soydan himself, who's German-born but of Turkish origin, and you can find out more here.
Posted by Russell at 15:23