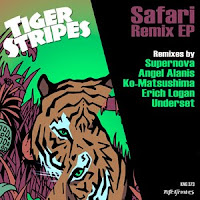 Versatile Swedish house/techno producer is about to release a remix version of his 2007 album Safari. Leading the charge is this four-track EP release featuring rubs from Supernova, Ko-Matsushime & Erich Logan, Underset and Angel Alanis.

Supernova turn Rasmus Plays The Marimba into a driving peaktime, dark room anthem – in a good way, I mean! Spirited Away gets reimagined as a slightly electro-y prog houser by Ko-M & Logan, but skip that and head instead for Angel Alanis' dark n' chunky house mix of the same, which has Chicago blood pumping unapologetically through its veins. And then finally the more ethereal Voyage gets a sprinkling of nu-disco dust from Russia's Underset, on a mix that should please fans of Prins Thomas and the Scandolearic massive.

On this evidence, the complete remix album package should be well worth acquiring.

About: This comes courtesy of the legendary King Street Sounds, nuff said.