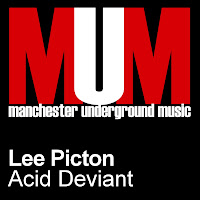 Nothing like jumping about from one genre to another and confusing the hell out of people, so after the chilled-out vibes of Fresh 27 (below), let's look now at this heavy-hitting offering from Lee Picton, which helpfully has a voice saying 'acid house' at intervals just in case you were confused as to what it was you were listening to. It's also got some amusing samples from what sounds like an 1950s public information film or some such, talking about nudists and masochists and other such twisted sexual deviants and their general incorrigibility.

I'd say it's actually more tuff, contemporary house with an acid/retro twist, rather than straight-up acid revivalism, but that's a good thing, surely? Anyway, there's three mixes, the Original plus re-rubs from Parazo and Tempered DJs, and any or all of 'em are playable but I think the Original just pips it for me, with the Tempered Boys for once a close second.

About: This is brought to you by the ever-checkable Manchester Underground Music, who mostly live on Facebook and MySpace
Posted by Russell at 20:41