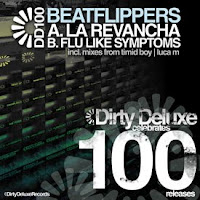 The original of A-side Flu-Like Symptoms is a jaunty, lolloping tech-house affair that wouldn't sound out of place on Great Stuff. It's something of a heads-down chugger at heart yet has enough energy to make it accessible for bigger floors, a fact picked up on by Luca M who, for his remix, ups the funk factor and slips in a little electrohouse breakdown/interlude bit that we'll forgive him for just this once cos the rest of the mix is actually pretty cool.

On the B, La Revanche is another cut that straddles the credible/accessible fence, just about pulling off that feat on the original despite its Dutch-style synth squiggles, but faring better for me when Timid Boy rolls up his remixer's sleeve and turns in a deeper interpretation that'll stand up on more credible floors, no problem.

Mixes to suit a variety of jocks then, making this a package that's well worth a look. Happy anniversary guys.

About: You can find Dirty Deluxe online here
Posted by Russell at 22:09