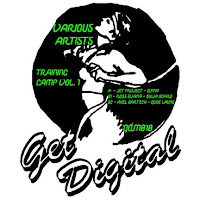 Again, a bit late on this – it's been out since Jan 13 – but hey. I figure a six-tracker from Get Physical showcasing the label's rising stars has gotta be worth at least a cursory mention…
I say six-tracker, but that depends what you buy. The vinyl has three tracks, from Jet Project, Ross Evana and Axel Bartsch; go for the digital download though and you get three more, from Andre Krom, Daniel Mehlhart and Darlyn Vlys.
As it's already out you can hear 'em for yourselves at Beatport et al so I won't go into every track, suffice to say the general vibe is the housier end of that Berlin sound. It's probably La Pause from Vlys that's floating my boat the most, with its unexpected bursts of ’60s spy theme dramatics in among the driving house rhythm, though the stripped, garage-y beats ’n' vox of Crom's Now Show Me are pretty gosh-darned fine 'n all. Not to say the other four aren't.

Out: Now
About: Get Physical is of course M.A.N.D.Y, Booka Shade and DJ T's label. They've been going since 2002 but in case you've been living in the proverbial cave, here's the relevant website.
If on the other hand you know all about Get Physical, but you want something to read anyway, then here's a website about raising lambs with lots of cute pictures of tiny baby sheep. Awww.
Posted by Russell at 21:06