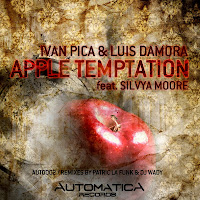 This nearly got overlooked – I'd originally flagged it as an also-ran, TBH, only then it was sat in my iTunes and after about the fifth time of iTunes rolling onto it and me going "ooh, what's this?" I decided it was worthy of some TIWWD love after all.
So yeah, it's not like Apple Temptation does anything particularly spectacular that other such tech-house groovers don't… it's just that it does the usual kinda things quite pleasingly. The spookily disembodied spoken female vocal comes from one Silvya Moore, and there are Original, Patric La Funk and DJ Wady mixes to choose from. The Original is a very Berlin-sounding affair, DJ Wady's is in a similar vein but more upbeat and driving and a little bit tribal round the edges, while Patric La Funk gives it more of a prog, almost trancey feel: I'd stick to the Original or DJ Wady m'self but there you go…
Out: Now (Jan 4)
About: This is on Automatica Records, who are based in Madrid and who can be found on MySpace here. I don't know anything about them, so instead I'll tell you that it's just started snowing heavily here in Bristol which has, somewhat randomly, brought to mind that episode of Little House On The Prairie where there was a massive blizzard. Strange what lurks at the back of your brain, innit?
Posted by Russell at 13:05