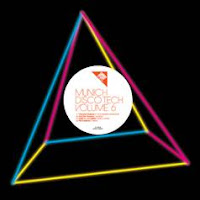 The latest in Great Stuff’s ever-checkable Munich Disco Tech series, and as ever there are some fine nuggets to tempt you.

The biggest surprise for me was Par Hammar’s Bang, cos the press release describes it as “a banging technotrack”… methinks they’re havin’ a bubble cos in real life it’s as jaunty and as hip-wigglin’ a slice of boompty-boomp house as you’ll hear all year. Me like!

Next up, Vincent Thomas turns in two tracks, Heureka and If I Had Known This Before. The latter’s a cover apparently but I’ll ’fess to not knowing the original, suffice to say both Vincent’s offerings are very respectable Deutscher house workouts, Heureka throwing in some cheeky disco soundsalike moments and a neat little jazz bass drop while the aforementioned …Known This Before, er, doesn’t.

And finally we get a surprise appearance from the Slovenian don of loopy, funky techno, the all-conquering Umek himself, who teams up with one Jay Lumen to deliver Sinful Ladies, a midtempo (for techno), percussion-y number that’s pleasant enough, but probably best filed under ‘warm-up’.

About: Great Stuff shouldn’t need any introduction by now, and anyway I’ve not got time… so here’s the relevant internet hyperlink thing and let’s be done with it.