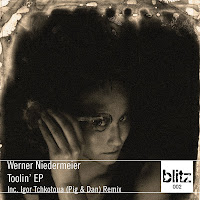 Only the second release on this fledgling German label, and it’s a four-tracker operating in that blurry house-cum-techno zone that Germany seems to specialise in at the moment.

Actually, saying that, lead track Moved is pretty much a straight-up techno cut, albeit techno of the deeper, more abstract variety rather than a nasty jackboot stompathon. The remix from Igor Tchkotoua (AKA Pig, of Pig & Dan fame) is slightly groovier, though, while Toolin’ Around is just a deep, tracky workout that will suit any floor where they like things heavily electronic, the funky feel to the bassline just kind of edging it towards house territory. Rounding out the EP is Niedremeier’s remix of Oliver Deutschmann’s For Those About To Dub, which for me is the best track here (though I was drawn first to the Pig mix of Moved): it’s got the deep, dubby feel you’d expect from the title, and some serious bottom-end that’s pretty much a cert to get YOUR bottom-end shakin’. There’s a nice little piano interlude, too.

About: This comes on Blitz, which as stated is a new label out of Germany. Visit their MySpace here and you can hear Toolin’ Around for yourself. Niedermeier, meanwhile, was formerly one half of Notenshun, who you’ll no doubt recall put out some great releases on Chillifunk earlier in the decade.