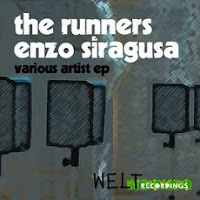 One of my most favouritest records in the entire history of the whole world ever ever EVER is Kingdom Come’s Groovy Baby, which came out on the legendary (and now revitalised) Strobe Records back in 1992 – a slab of deep house/deep garage that’s so unutterably soothing and beautiful it does funny things to my spine.

I mention this cos for the first couple of minutes, Siragusa’s Himba Raindance sounds just like it… and I don’t mean that in a bad “it’s-a-rip-off” way, I mean in a good “okay so it’s the same piano chords but basically can more people make more records like this, please?” way. It then goes a bit more Balearic-y but that’s okay, for once the hand percussion does actually add something to the track and the chants are used deep in the mix, not right up in your face… think somewhere around classic Orb, A Man Called Adam or A Certain Ratio’s ACR:MCR album, and you’re in the right ballpark.

Yeah, generally speaking Himba Raindance is purr-retty damn spiffing in my book. Which this review is rapidly turning into. So just quickly, the other half of this split EP comes from The Runners (AKA Luke Turner and Kevin Cook), and it’s called Ushuaia, and it’s kinda similar and very nearly as good, except here the Afro chants don’t work quite as well…

About: This is on Welt Sounds, run by Nima Gorji, and it came out on Dec 20 when most of us were thinking more about buying Christmas presents and cranberry sauce and stuff. Find them on Facebook here or on MySpace here. Enzo Siragusa, meanwhile, is the man behind the Fused parties, which are held in that London on a Sunday and which I’m told are rather popular.