Various - Do You Want A Rose? EP 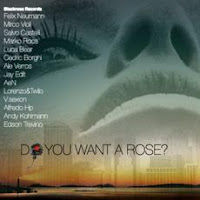 Another new-ish label gets its first dose of TIWWD love! This time, the label in question comes from Italy, and is called Blackrose Records. You can see what they've done with the EP title, then.

Do You Want A Rose? features five tracks from five different producers. Of those five, I'd only heard of V.Sexion before, but as I seem to recall reviewing a previous release of his with the words "let's hope we hear more soon", that name was enough to pique my interest immediately. Truth be told his To The Beat Of The Base (sic) is by far the standout track here, not to mention the housiest, but the rest of the tracks - from AeN, Luca, Mirco Violi and Andy Kohlmann, and again mostly in that hard-to-quantify deep house/deep techno kinda vein - aren't too shoddy, either, with Luca's Curtidas in particular being a pretty decent dancefloor groover with an ever-so-slight Latin-y kinda edge.

About: Blackrose is a Turin-based "house/techno/minimal" (in their words) label set up earlier this year, and this is a sampler for their forthcoming introductory label compilation of the same name. You can find out more about the label by clicking here