Ross Warm - I Am An Original 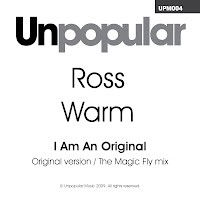 You might quibble that there’s nothing particularly original about the preacherman-style vocal here – and you’d be right – but all the same, I Am An Original is an okay slab of house in its Original Mix form… tuff enough to work a big floor but not stupid, not devoid of soul but not drippy, either… even if it does sound like something Fluential might have put out circa 2002.

The reason it’s here, though, isn’t the Original Mix but the rather jaunty remix from Magic Fly, AKA one Rob Watson (who also records as Doktor Watson and Wicked Devil. it says here). In Magic Fly’s hands, I Am An Original is turned into an uptempo breakbeat/ska romp that recalls the not-shit side of (whisper it) big beat. Like Rock The Funky Beat for instance (of which more soon, BTW).

About: This is out on November 16, and it’s on a new label outta Nottingham called Unpopular Music, whose electic roster of artists I notice includes San Fran house bods Andrew Phelan & Origami as well as local indie kids Brown and Brighton boy Warm. “The concept of the label is non-genre-specific, with no niche pandered to and no style written off.” Jolly good, then.