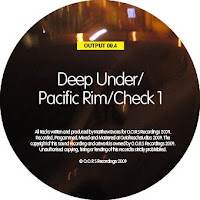 For proof that the deep house scene is alive and well in the UK, look no further than this, the latest in a series of mysterious EPs emanating, I believe, from Manchesterford-On-Sea.

The best way I can describe lead cut Deep Under is, imagine that slightly garage-y/disco-y deep houser you heard at the best DiY or Smokescreen rave you never went to, just as the d***gs finally took their toll and you had to go curl up in a warm, fuzzy ball somewhere. Get the idea? Good, now fast forward a couple of hours… till the sun’s come up and it’s a bright sunny dawn, and there’s still half a dozen stragglers dancing in a somewhat weary and spangled fashion, while more sensible, mumsy hippy women are handing out cups of tea… and there, that’s what Check 1 sounds like.

The Balearic, E2/E4-aping Pacific Rim isn’t quite up to the standard of the other two, IMHO, but it’s still a solid bet for free party soundsystem action. All told, then, for lovers of underground UK deep house this is sheer quality you don’t wanna miss.

About: Ha ha, don’t know… there’s not even a proper artist name given. How underground you want it?! All I know is the Output series comes from a guy called Matt…