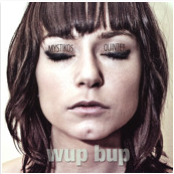 Got sent this a few weeks ago and it's out already but what the hey… unless you're a keen follower of the downtempo/jazz scene in Indiannapolis there's a fair chance you won't have heard it!
I must admit I'd not heard of (the?) Mystikos Quintet before, but this is apparently their fourth long-player, which would go some way to explaining how they get their tunes sounding so damn polished. They describe their music as "hook-laden, groove-centered [sic] downtempo, jazz-tronica and acid jazz", and I'm not really sure there's much I can add to that, save to say it's a pretty fair description, and maybe to add that it doesn't quite do 'em justice, because from those words alone you'd never guess at the raw funk of Bonehead Jazz or the dubby deep house stylings of Basic Channel, two of the album's highlights for me (along with the uptempo, soul-infused I Can Give You Good Lovin' Baby, which I bet is a killer live). You wouldn't think automatically, "Hey, I bet they've used a sampled jazzman vocal, in the manner favoured by loads of west coast house bods, but on a jazz tune, which when you think about it is quite unusual." Nor would you guess that with track titles like Midnight Herb and Roach Clip, the album comes complete with some helpful, not-very-subliminal-at-all-really suggestions as to how this album might be enjoyed to its fullest. Guess that's where the phrase 'jazz cigarette' comes from, innit?
Overall, this is an album that's rooted firmly in jazz but equally right at home in the 21st century; it's not afraid to shake its booty on the dancefloor now and then, but mostly inclined towards late-night listening in smoky rooms. And it's really quite good, so go HEAR THE TRACKS yourself at the MQ website (below).
About: This is on Jersey Blu records, about whom I know nothing… ditto Mystikos Quintet themselves, but here's a link to their website to be going on with.
Posted by Russell at 19:17