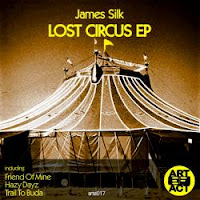 Like the Stanny Abrams track below, opener Friend Of Mine here is big n' squelchy, albeit in a contemporary bassy tech-house rather than a 90s organ house kinda way; like Roman Rai's Sometimes two reviews down, it plunders some veteran acid jazz for its vocal, albeit this time Incognito rather than Brand New Heavies. It's rather splendid, in other words.
Elsewhere on the EP, you'll find Hazy Dayz and Trail To Buda. The former's a midtempo tech-house chugger with a deeply satisfying bottom end, some lilting, Steely Dan-esque geetar twiddles and a falsetto male vocal sampled – I'm guessing – from some 70s soul brother that I'll probably kick myself when someone tells me who/what it is! The latter is a slightly more uptempo groove with a sparser feel, some analogue squelch and disco-tastic "all right" vocal snips, and a jazzy, frenetic piano breakdown midway through.
The last two perhaps lack the 'instant anthem' appeal of Friend Of Mine but both are still very cool, confirming Mr Silk as a producer you definitely need to be keeping an eye on right now
Out: This week
About: Despite James's Liverpudlian origins, this actually comes all the way from southern Europe, on Macedonia's Artefact Records. As they haven't featured on here a million times already, here's the full set of links: Facebook Soundcloud MySpace YouTube and their own blog.
Posted by Russell at 20:08