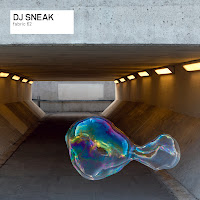 It's been, ooh, 17 years since Sound Of Ministry put out a compilation called The Future Sound Of Chicago; that was the first time, I'm pretty certain, that yours truly came across a man called Carlos Sosa, better known as DJ Sneak. Not long after that, I first saw him DJing, on a Thursday night @ Sankeys Soap in Manchester. Then still pretty much an 'up-and-comer', he blew the place away – it's one of those rare nights from back in the day that actually sticks in the memory! I was covering the night for a long-defunct Manchester magazine, where I described Sneak's set as "a jazzed-out, techno-infused trip to the jacking, pulsating disco heart of house music", or something equally pretentious.
Well here we are a decade and a half later, not a lot's changed. I'm still talking shit about house music, and Sneak's still one of the best in the game at it.
I'd like to leave this review right there, but I should probably also tell you that this features lots of tracks and mixes from names that will be very familiar to readers of this blog – Ramon Tapia, Mike Jules, Luca M, Mendo, Darius Syrossian – and some other names that might not be… yet. Oh yeah, and I should tell you as well, that it includes a remix by Mr Tapia of the classic 'Special' by Sir James. That track aside, though, this is long on truly upfront shizzle, and of course several tracks from Sneak's own Magnetic label.
But mainly I just wanna tell you that this is the absolute mummy-cuddlin' BOMB. And we really will leave it right there.
Out: This week
About: You've probably heard of Fabric… they've got their own discotheque in London and everything!
Posted by Russell at 20:19