I'm Fine & Antonio Olivieri – If I Were Music 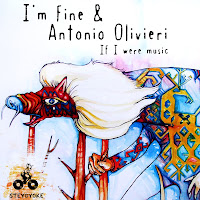 New label alert! This is the very first release from a new label outta Berlin called Steyoyoke, and sees Berlin's I'm Fine teaming up with Italian-born but Berlin-resident Olivieri, who's previously had stuff out on Darkroom Dubs, among others.

It's a three-track affair. If I Were Music itself will be instantly recognisable the first time you hear it, based as it is around a slowed-down male vocal intoning the title over and over again. Musically it's a slow, brooding affair and to be honest, a dub or instrumental wouldn't have gone amiss… but at least that vocal does make the track stand out.

Your Ghost, similarly, might have benefited from a mix without the very 80s, European-sounding female vocal. But never mind, cos the main event here for me is Do Not Care, which teams a dark, ominous bassline in a vaguely Plastic Dreams/Positive Education-ish style with tuff beats, chanted vox and what I THINK is either a Hawaiian guitar or a sitar, all adding up to a track that's got something of the hypnotic feel of Indian ragas about it.

It's probably only the latter that I'd play myself but with three very distinctive, and very different, tracks on offer this is a strong debut release for the label all the same.

About: Find out more at the Steyoyoke website
Posted by Russell at 14:09