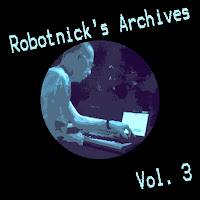 The Italian disco don serves up three more from the vaults, this time in the form of Serenade from 1986 and, coming more up to date, Sharper Bluesman from 2004 and a cover of Le Freak from 2000.

The electro-funkin' Serenade will delight those with a fetish for squelchy analogue 80s synth-bass, which I suspect might be quite a few TIWWD readers… vocodered vox from Robotnick himself merely add to the track's retro-tastic appeal. Listening to stuff like this, it's very easy to see how we got from disco to house, which I guess is kind of the point of issuing it now (like the rest of the tracks, this is seeing the light of the day for the first time).

Sharper Bluesman is less essential to these ears – as mid-noughties electrohouse goes it's fine, better than most in fact, but I wouldn't rush out and buy the EP for it. But more pleasing is Le Freak – for curio(sity) value alone, but also as a prime example of how/why Robotnick has been such an influence on the current wave of Italo-obsessed nu-disco producers (or was that last year?).

Anyway, never mind the last paragraph… you need this for Serenade alone. The rest is just gravy.