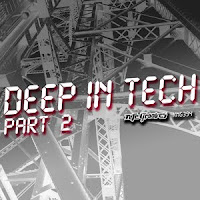 After the various artists EP from 5 And Dime below, let's jump straight from one of the world's smallest and newest house labels to one of the world's biggest and longest-running, with another V/A offering courtesy this time of the mighty Nite Grooves/King Street.

You've got to hand it to King Street, really. Traditionally the label's been best known for US-style soulful house n' garage flavas, and they still do plenty of that… but they've also embraced the more contemporary, techy/European house sound as few labels of their ilk have. Old dogs can not only learn new tricks, it seems, they can actually do them pretty damn well! As such, if it's deep, driving tech-house grooves for strobe-y basement rooms you're after, this is well worth checking.

On offer, then, are four tracks from four artists. Chris B's Fiji and Converge+'s Quest are the tracks that lean most strongly to the techno side of the tech-house equation, the latter being notable also for a dark, rumbling, almost speed garage-ish b-line, while Kera's Convoi Exceptionnel and OMB's Stay With Me have a little more of that dreamy-druggy-proggy 'lost in music' kinda feel going on.

But these are fairly subtle (and highly subjective) distinctions. And again, I'm loathe to pick a favourite here because all four tracks will do their job admirably, and for an EP featuring four more-or-less newcomer artists, that's no mean feat.

About: You surely know where to find King Street online by now? As regards the artists involved, you might like to know that Converge+ is Japanese producer Hiroshi Endo while Kera hails from the Netherlands.
Posted by Russell at 21:28