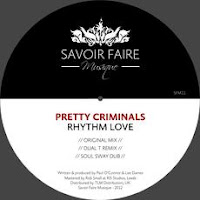 Well, pretty much. It's fair to say that Rhythm Love isn't the most groundbreaking or radical deep house record in the world, but then you don't need every record to be (and if they all were, none of them would be anyway). But as solid bets go, this is very solid indeed, with mixes ranging from the midtempo shuffle of the original to the more insistent and driving Dual T Remix (my pick for floor play) to the sparser and slightly more leftfield Soul Sway Dub.
Out: This week
About: Just to remind you, Savoir Faire Musique is brought to you by Scott Harrington of City Soul Project, and is based in Southend On Sea… find 'em on Facebook, Soundcloud and Mixcloud.
Posted by Russell at 18:38