Because I promised it… and because there are some proper gems here that deserve a mention… and because NONE OF THESE RECORDS ARE MORE THAN 14 DAYS OLD, damn it, so enough with the 'resolutely upfront' shit already… here are some bits and bobs from the week before last. I'll be quicker this time, and I guess you can always file 'em under 'oldies but goodies' if you must…

Acos CoolKas feat Nata Tomata
Don't Fly Away EP
Sumptuous slo-mo/nu-disco/downtempo vibes on the Original and Maneken mixes… then that boy Jimpster steps in to house things up. Nicely done.
More info
B.Cliff
Rollin' EP
Rollin' by name, rollin' by nature, as NYC's B.Cliff serves some jaunty tech-house vibes for your dancin' pleasure. Five solid tracks but the BNZO Remix of Rollin' in particular is, er, rockin'!
More info
Dima Sinclair
SinclaDizko EP
Typically driving, proggy grooves from Eternal Music here, but infused with elements of nu-disco on Tokyo Dizko, while on Whisky Bar moves more fully into glitterball territory and is definitely worth checking out for yourself.
More info
Kerkez
Garage Loop
This doesn't have a lot to do with garage, despite the name. What you get instead are three very solid cuts in a leftfield-ish house kinda vein, Club Cuts busting a pleasing combo of trad-style vocal loop with tuff, techy beats while Sleeping Raver makes surprising but effective use of a hoover sound…
More info

Luke Gibson
Don't Talk EP
Coming on Carlo Gambino's promising new Leeds-based imprint Midnight Social Recordings, here's some proper bumpin' deep house for your dancefloor. With five varied and playable mixes, it really deserved a bigger (and timelier) write-up than this – particularly the RJ Fletcher rub of Mello Daze. Sorry Carlo!
More info
Omar El Gamal
Plan 100 EP
Some tuff, driving tech-house – bordering on techno – courtesy of Essex stalwarts Hype Muzik (part of the Stripped Digital stable).
More info
Overcast Sound
Popoloco EP
And, for a complete change of pace, some ultra-laidback vibes here from the ever-experimental, ever-checkable Falk, who are based just down the road from TIWWD in Bath. They're calling it 'deep, hypnotic dub techno', and who are we to argue?
More info
Rasadon Ramzees
Life Is Beautiful
Two startlingly different mixes on this offering from Zipped Records. We'll pass swiftly over Atomikk Pulse's tech-trance take, though, and head for the Rene Beer Remix, a lovely piece of slo-mo/downtempo bizniss infused with a dub sensibility.
More info 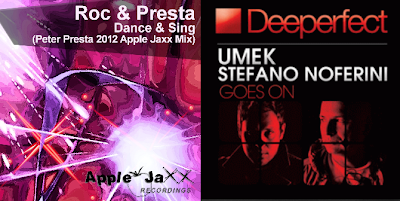 Roc & Presta
Dance And Sing
…get up and do your thing! Insistent party-starting female vocal loops over what SWEARS it isn't a Stardust loop, but sounds like a heck of a lot like one. Dancing almost certainly ensues, one would imagine.
More info
Umek & Stefano Noferini
Goes On
And finally, we end our catch-up session with this rollicking disco-techno slab from two heavyweights of the European techno scene. You'll move to this even if you're normally allergic to harder sounds, methinks.
More info
Posted by Russell at 22:23