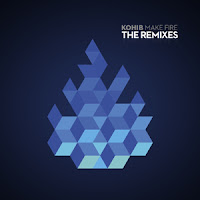 If you were wondering why it's been a bit quiet on the blog front, well, it's the first week of January and there's not a lot coming out. But that's cool cos it gives me a chance to catch up with one or two bits we missed… like this remix version of Kohib's 2010 debut album Make Fire.

Kohib is a DJ/producer from the north of Norway called Øivind Sjøvoli, who's been active on the scene in Tromso since the late 90s. The remixes in question come from Stoyvind, Syntax Erik, Boska, Frisvold & Lindbaek, Dennis Jr and Lepetitgarcon and they cover various musical bases, some a little poppy for this blog. But the tracks you need to be heading for here – IMHO – are Frisvold & Lindbaek's epic psychedelic disco take on Tales From A Nomad, the funky lounge vibes of the Dennis Jr Mix of Fang Song and, for peaktime frolics, Stoyvind's rub of Push Me Down.
A mixed bag, then, but one that will repay closer investigation.
Out: A couple of weeks ago… my bad…
About: This comes atcha courtesy of Norwegian imprint Beatservice
Posted by Russell at 21:28