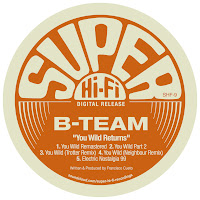 "Funky" has to be one of the most over-used and oft ill-applied words in the English language… as any DJ who's ever been asked if they've "got anything funky?" while they were playing a Brass Construction, Meters or Fatback record will testify! But sometimes it's the only word that'll do, so in the words of the Prodigy (almost)... this is some funky shit right here.

I must confess the original release of You Wild must have passed me by, so I'm coming to this remix EP afresh. But that's okay because they've handily included the original, which is… well, yeah, some funky shit for sure, in a midtempo, chopped-up, breakbeat/nu funk kinda way. The first of the remixes, Part 2, is basically just a looser-limbed jam on the same theme, while the Trotter Remix beefs up the beats to nudge us more firmly in a house-ified direction.
But while all those three are cool, for me the standouts here are the Neighbour Remix of You Wild, which takes us into classic electro territory (by which I mean proper Patrick-cagoule-and-a-roll-of-lino electro, not the shit-80s-synth-pop dross that seems to pass for electro these days), and bonus cut Electric Nostalgia 99, which lives up to its name nicely by taking us on a trip back to the early days of house in the mid-80s. Check that bassline for some SERIOUS phatness, people!
Out: This week
About: This comes on a label I don't think have featured on here before, Super-Hi-Fi. They're based in Virginia in the US of A, specialise in 'breakbeat/house/funk' and can be found on Soundcloud and Facebook.
Posted by Russell at 19:45