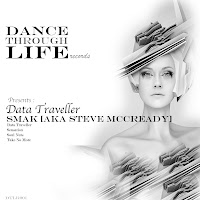 The first release on a new label, I believe – or at least, I've not come across Dance Through Life Records before and it's catalogue number DTLR001, so I'm guessing they're new. It comes from Smak, AKA Steve McCready.

In fact, Data Traveler itself is taken from last year's debut album, Addicted To… , so its dark, moody tech-house vibe may already be familiar to some of you. It's accompanied here, though, by three brand-new tracks. Sensation, with its female vocal whoops, space disco/sci-fi synths and warm, organic-sounding bassline is the housiest of the three and probably my favourite cut on the EP, but Take No More, which blurs the deep/prog boundaries, is also very strong, while the unashamed out-and-out prog of Soul Nuts brings the EP to a suitably driving, euphoric close.
All told, a solid EP, different tracks from which are likely to find favour with different DJs, proving that this young Irish producer is no one-trick pony.
Out: This week
About: Having now found Dance Through Life online I can confirm that this is indeed their first release… the next one will be coming soon from a Mr Pepper and you can HEAR both at their Soundcloud page. They're based in NYC and can also be found on Facebook.
Posted by Russell at 21:06