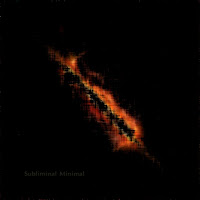 Well now, here's a confusingly titled record… cos it isn't particularly minimal, and it certainly doesn't sound like anything on Subliminal either. It is rather good, though.

Actually, I guess Minimal Subliminal is a little bit 'minimal'-ish in its sound palette – lots of random blips and clicks. But there's not, y'know, one of the above every 20 seconds and that's it, or anything. Instead, I'd say the overall vibe is deep-ish techno, but with a definite spring in its step… so more of a dancefloor cut than the phrase 'deep techno' often implies, I guess.
But then what do I know? I never claimed to be any great expert on techno, I'm a house boy! "I don't know about techno but I know what I like," to coin a phrase. And I like this.
Just the one mix so that's all I've got to say, really.
Out: This week
About: This is on Manchester-based label Zipped Records, run by Zac Cawdron who's been a big supporter of the TIWWD Facebook page since it started, so thanks for that Zac! There are plenty more goodies from Zipped coming soon so keep an eye on their Facebook, Soundcloud and MySpace pages.
Posted by Russell at 21:24