This Chris – Just Another/Touch Of Ice 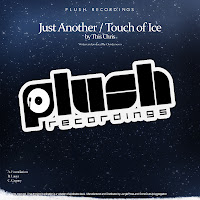 Bit of a change of pace now as move into D&B territory… but it's not actually THAT much of a switch really, when you think about it, because we're just going from sumptuous deep house to sumptuous deep liquid funk.

In fact, I wouldn't have any qualms about dropping Just Another into a deep house set at all… the actual mixing might be interesting but the same things I said about the Tony S release below – the beautiful warm sounds, the sparing sound palette, the roomy, echo-y mixdown, the minimally-applied touches of vocal – all apply just as well to this.

On the B, Touch Of Ice is a little more firing in the percussion department and does a little bit more in the way of building and dropping… but we're still in decidedly chilled-out, late night kinda territory.
Just nice mellow vibes all round, really.
Out: This week
About: This comes on Plush Recordings, who've featured on here before but – just to jog your memory – are a label exploring the deeper side of D&B who are based jointly in Denver, USA and Lowestoft, UK.
Posted by Russell at 21:14