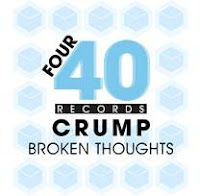 Don't seem to have had any dubstep on here for a while… people keep sending me lots of silly kiddly gnarly chavstep bizniss. But here's an altogether deeper and more satisfying dubstep/future garage EP to wrap your ears around.

Opener 5am sounds to me like how dubstep might have sounded like if it had been invented by Warp Records circa 1991, as resonating bass chords and glitchy, D&B-influenced percussion do battle with bleeps, analogue synth sounds and tons and tons of reverb. Broken Thoughts is a more melodic affair with a highly distorted, resung vocal refrain from Simonelli's garage classic Do You Feel Me? (released as NY's finest, and which in turn sampled it from Zhana's Sanctuary Of Love) over frantic snares and technoid rave-y bass. And then finally I Don't Want You is a big, dramatic stomper with almost Ibiza-eque pop/electro touches.
The first two have the edge for me, I think, but overall this is an EP that proves there's still plenty of fruitful exploration yet to be undertaken in this particular part of the electronic music spectrum.
Out: This week
About: London-based LU10, sister label to Four40 and Lepento, can be found on Facebook and Soundcloud.
Posted by Russell at 13:51