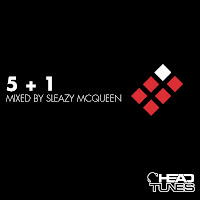 Florida's Sleazy McQueen mans the decks for the first label compilation from Boston-based label Headtunes Recordings, featuring 16 tracks in both mixed and full-length, unmixed formats. Headtunes have featured on this blog a number of times, so you should have an idea of the kind quality straight-up house, long on classic sounds, to expect.

With cuts on offer from a host of today's hottest names – Grant Dell, Jesus Pablo, Peckos, Do It Proper – as well as some producers that are brand spanking new, there's plenty to delight, but special mention must be made of Sleazy's own Big Times, Big Tings (presented here in Cole Medina's Buffalo Times Mix form) and Cosmic Boogie's Feel It. The latter is the closest you'll ever get (now, anyway) to dancing to Chi-town house at Ku or Amnesia circa 1987, while the acid-dripping former is a plastic dream come true for lovers of old skool sounds brought right up to date…
Elsewhere, Grant Dell's House Tribute should raise a smile among older heads who remember House Of Gypsies' Samba from back in the day, while Need Ya (also from Dell) comes on like Booker T & The MGs got a gig as house band at Berghain. There are disco frolics from Mario Dujic, squelchy slo-mo vibes from Do It Proper, soul-infused grooves from Noise Destruction and more besides.
Excellent stuff all round, and it's being released to mark the label's 6th anniversary (hence the title), so happy birthday guys, here's to the next six years!
Out: This week
About: There's an interesting story behind this album, because Headtunes used 'crowdsourcing' site Kickstarter.com to raise the cash they needed to release it. So respect to all those who contributed! Click the link for the Headtunes website, or find 'em on Facebook or Soundcloud.
Posted by Russell at 11:05