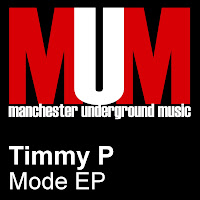 A three-track EP here from the mysterious Timmy P, on which he touches several house bases.

Mode itself is the most uptempo and driving of the three cuts, with a tuff techy beats n' bassline groove counterpointed by insistent female wails – not to mention a wee snippet of a VERY familiar male vocal from way back in the day (I won't spoil it but you'll know it the second you hear it) – and… er, well that's about it really but that's all you really need.
Moving on, 1880 is another fairly chunky number but with a slightly more late-floor kinda feel… which brings us nicely to the real star of the show for me, Afterparty, which appropriately enough is a deeper proposition altogether, starting out with fairly no-nonsense kicks but soon warming up with lots of atmospherics, gently tinkling keys and floaty, disembodied vocal hooks.
Afterparty's my pick but it's a strong EP all round.
Out: This week
About: This comes on Manchester Underground Music
Posted by Russell at 20:07