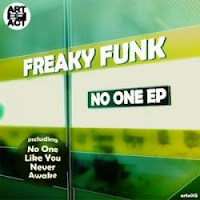 Freaky Funk is the nom de guerre of a house DJ/producer from Montenegro, who in real life goes by the name of Nikola Jovicevi. That's about all I know about him but I can tell you that, here, he's delivered an EP for Macedonia's Artefact Records that should appeal to a range of house jocks.

Sitting somewhere between 'deep' and 'funky' on the house music sliding scale of subgenres, the four tracks here – No-One, Never, Like You and Funk Awake – tread that fine line that Om once made their own: credible enough to appeal to more discerning heads, but with enough of a disco shimmy to tempt more a more casual audience to their feet as well.

There's perhaps not that one killer cut that means you need to stop what you're doing and buy this record immediately, though No-One itself, with its disconcerting spoken vocal samples, does stand out (and so merit its title position). But overall, it's quality stuff for sure. Let's hope we hear more from Freaky Funk soon.

About: I'm pretty certain Artefact Records are making their debut appearance on this blog today, but they're based in Skopje, Macedonia (despite having a .co.uk web address – go figure) and can be found on Soundcloud, Facebook and MySpace, or at their own blog.
Posted by Russell at 09:26