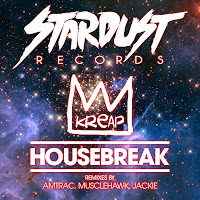 From one end of the seesaw to another now… from the deep techno of Lee Guthrie to the unashamed dancefloor fun of Housebreak.
The original is the one here, a funk-infused disco-house affair with hip-house flourishes and a vocal seemingly sampled from a dog-training instructional LP… if you're old enough to remember when Gym Tonic first landed as a hot French import in deep house clubs, before the cheesy shit cover went to No 1 and ruined it… well then you know the kind of grin-inducing peaktime cut to expect here. It's not big and it's not clever, but it'll get booties shaking on the floor for sure.
The various remixes (from Jackie Alfresco, Amtrac and Musclewash) either play up or play down the more obvious Dutch/electro touches but for me, the Original hits the right balance. You also get a bonus track that's somewhat oddly entitled Chimpanzee Fucked On The Elevator On The Way To The Food Court… and that's another perfectly serviceable disco/funk-infused houser for peaktime play, with another hip-house vocal.
Unpretentious fun all round, then.
Out: This week
About: This comes on US disco-house label Stardust Records, who you'll find on Soundcloud and Facebook
Posted by Russell at 22:46