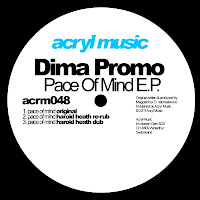 It seems like a while since we had anything on here from Acryl Music, but I think that was down to all the confusion of iDJ closing and my old email not working anymore. But now here's the latest from the Swiss house label, and I'm pleased to report that the usual high quality standards are still being maintained!

In its original form, Pace Of Mind is a midtempo deep houser notably for a seriously large, speaker-satisfying walking bassline that does double as the track's lead. Niceness! You also get not one but two remixes from the ever-prolific Harold Heath. His Re-Rub brings the track's dreamy, trippy elements to the fore (while still being big n' groovy enough for floor play), while his Dub really ain't nothing but a heads-down groove thang, in the best possible way.

About: Like I said, it's been a while but Daniel Kneubühler AKA Da Funk's Acryl Music has long been both a favourite and a supporter of This Is Why We Dance, so show some love and hit up their website and Facebook page.
Posted by Russell at 19:40