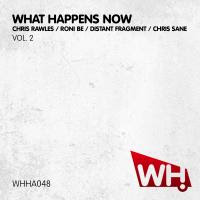 First up we have the no-nonsense rolling deep/tech house of The Red Spotlight by young Danish producer Chris Sane, who also serves up Listen From Behind, which is in a similar kinda vein – think San Fran to Berlin via the East Midlands and you're somewhere in the ballpark. Bumpin'.
Next is another Chris, the UK's Chris Rawles, whose Roomdriver is another tasty slab of tech-house jackery. Mr Rawles also then gives us the slightly deeper and more funktified Hick Up, before the EP comes to a close with Super Classico, a fat, lazy groover with a phat b-line and a pleasantly driftaway kinda feel courtesy of Israel's Roni Be, and finally a tuffer tech-house bullet from Greece's Distant Fragment in the form of Altered Matter.
The latter cut's perhaps a little close to straight-up techno for me but taken as a whole, this EP kicks some serious ass. Show some love people!
Out: This week (except on Beatport where it's been out for a bit already)
About: What Happens, in case you didn't know, is run by my boy Tim Andresen over in Denmark and the label's been on a serious roll of late! More info here and at Tim's own website.
Posted by Russell at 20:12