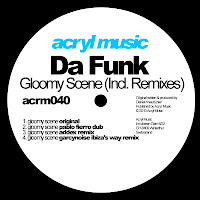 In which Daniel Kneubühler, aka Da Funk, boss of Switzerland's ever-excellent Acryl Music, takes a bit of a left turn from the deep stuff and turns out one seriously heavyweight main room dark, proggy funker. Think early Underworld at their grooviest and you'll get the idea about the original and the GarcyNoise Ibiza's Way remix.

Then, flip it over and we're back to the quality deepness we've come to expect from Acryl, with Addex delivering a lean and mean 4am hip-shaker that wouldn't have sounded out of place in a Terrence Parker set circa 1994, and Pablo Fierro dropping some pad-tastic dub science for those more horizontal moments.

All told: it's groovy, baby.