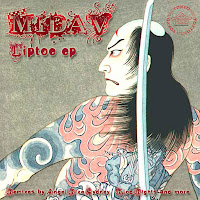 Since we seem inadvertently to be on something of a techy/proggy kinda tip, right now seems to be a good time to tell you about the Tiptoe EP from Midav. Don't know thing one about Midav but this is, as per the last couple of reviews, groovy, deep electronic music from the house/techno border zone. In this instance though there's a range of mixes on offer, from Sydney & Klod Rights, Marcello Nassi, Mile and Angel Rize – two tracks and six mixes in total.
Tiptoe itself is a rolling deep house affair with some nice St Germain-ish minor key piano chords. The Marcello Nassi mix takes it a wee bit deeper still, and then a rerub from Sydney & Klod Right takes it into darker, more techno-influenced territory. The latter mix is quite a change of mood, but it works. One Mode, meanwhile, is a more prog-tinged affair: the Original and Angel Rize mixes don't vary a huge amount, but Mile offer(s) a little more dancefloor oomph on his/her/their mix.
About the label: This is another fine release from my boy DJ Sydney's excellent tech-house label Tokyo Red. Next stop: MySpace. Which might even tell you when Tiptoe is out, cos I don't know for certain (but round about now, anyway).
Posted by Russell at 13:44