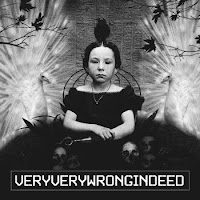 Okay so let's flip it a little bit here, with a release that could just about be classed as tech-house I guess, but to my ears is pretty much straight techno. But straight techno that I actually really, really like… and THAT doesn't happen very often.
Two tracks: Cyrus One is bleepy in parts, deep dark and rumbling in others and jacking throughout, while Viper Room is the kind of bass-heavy, slightly menacing groove that makes me think of driving through desolate cityscapes late at night.
And both have been getting numerous plays round these 'ere parts. This is sterling stuff you really need to acquaint yourself with immediately.
Out: Tomorrow (23 Aug)
About: This is on Very Very Wrong Indeed, Tim Sheridan's London-based label whose stuff is normally too dark/techy for me, but here's their website anyway.
Surprisingly, Codec Shift turn out to be none other than Alistair Albrecht (of Hagenaar & Albrecht fame), a man normally known for the more commercial side of house, plus a hip-hop DJ called Greg Lakin (who I can't say I've heard of, but then I don't know hip-hop from a hole in the ground).
So, ex-big beat chappy sets up label, releases record by commercial house producer and hip-hop bloke, and it's one of the best techno tracks I've heard this year… whoever said that 'pigeonholes are for pigeon shit' clearly had a point!
Posted by Russell at 10:42