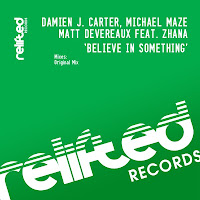 Right then pop kids, bit biz @ the mo' cos, see, some people like me to review records on a professional basis, in an actual magazine, as opposed to just spouting s**t about them into the ether for no apparent reason… so while I'm tied up doing that, have a free Damian J Carter track to keep you going…
Here's what they have to say about it:
Relifted Records serve up a monster house package from Damien J. Carter,Michael Maze, Matt Devereaux: Believe In Something feat Zhana / co-written by Barbara Tucker.

Featuring no less than six different tracks, all from different points on the house music sphere, this release kicks off with the big, brassy original house anthem with huge basslines, rousing chord stabs and some twisted, steely synths which make your lip curl that little bit higher. The BeatThief’s remix is a much more urgent, clipped and driving dollop of house. The vocals remain, as do the huge breakdowns and piano riffs, but it’s a much darker vibe than the original. As well as another chunky, techy remix from Hannah Hansen, there’s a re-rub from Cr2 Records’ talent SKJG Project. It’s a restrained, stripped back groover (perfect for those late nights in room two) which progressively builds with whooshing effects, delicate percussion and a beastly beat. Next up Stealth Records producer Darko DeJan ,alongside Patrik Carrera, re-interprets Believe in Something into a rolling, funked-up number which jacks up and down and rides on a bed of stabby chords and wood block percussion before MarFisher adds some blips and minimal energy before, once again, the huge vocal comes in. The latter half of the track is as restrained as the first, with a heads down vibe from start to finish: A solid package with something for everyone.

You can HEAR all the mixes here:
Believe In Something by Damien J. Carter

and you can DOWNLOAD the Original mix by clicking here
Right, back to work…
Posted by Russell at 20:09