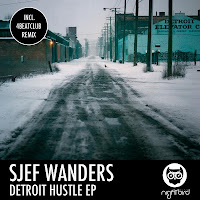 Detroit Hustle itself teams raw, jacking Motor City beats with sampled hip-hop vox and snatches of the mighty Holloway tonsils, but goes slightly overboard on the rattling, incessant hi-hats for these ears. As a result I'd probably plump instead for the B-side refix from the UK's 4BeatClub, which is a warmer, more musical take that drops the diva vox and hissing cymbals in favour of some jazzy sax parps, though it does lack the original's sparse, stripped beauty.

Rounding out the EP is the sumptuous, garage-y late night groove of Many Ways, with its cheeky snips of a much-loved classic vocal. I won't spoil it by saying what one, though, you'll just have to check it for yourself!

It's a pity about those OTT hi-hats on the title cut – the same mix without them would be an utter, stone-cold killer – but this is a very strong release all the same.

About: You can find Nightbird Music on Facebook, on Soundcloud or at their own website.
Posted by Russell at 20:49