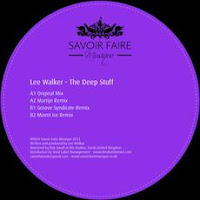 In its Original form, The Deep Stuff is typically sumptuous SFM deep house tackle, chugging along nicely at 120bpm and sporting a pleasingly understated, though insistent organ line (and at one point, what sounds like a dog barking but might not be). Deep Edition label boss Martijn gives us a remix that's similar but slightly rawer-sounding, Groove Syndicate beef up the kicks and push the tempo a notch, while Miami Ice take us even deeper with a mix that rides groovier percussion and adds lounge-y sounds on top.

All that said, the four mixes aren't hugely varied, to be honest. Good job the Original is as strong as it is, then… cos that also means you won't go far wrong with any of 'em.

Classy stuff as ever from SFM.

About: You can find Savoir Faire Musique on Facebook and Soundcloud.
Posted by Russell at 21:57