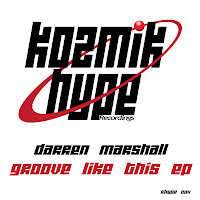 Unlike the very drummy Bimas release below though, here the emphasis is more firmly on the house side of the equation. Groove Like This itself tops its fierce percussion with parping sax and Negro-esque space-disco stabs, while We Know Jack veers even further towards disco house territory – albeit in a grown-up kinda way, and still with those rolling techy drums.

Two very solid bets for the slightly slinkier floors, then.

About: This comes on Kozmik Hype Recordings, who are based in Toronto and who can be found on Facebook, on Soundcloud or at their own website.
Posted by Russell at 15:04