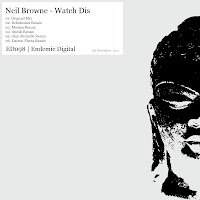 Okay, so just in case you were thinking the Wagon Cookin' track was a bit poppy – which admittedly it is, but I still like it all the same – let's move on next to this (or should that be dis?) which is as resolutely underground an affair as you could ask for.
It's good value for money, too, cos there are no fewer than six mixes of Watch Dis to choose from, representing a range of styles. The Original, d00sh and Darren Flecta mixes could all basically be filed under the 'tech-house' banner, but they do vary: the Original uses eastern sounds and crisp beats, d00sh's has more techno-fied lo-end rumble while Darren Flecta's is a bit more tripped out in a plinky-plonk kinda way. All are playable but I think the Original wins out for sheer originality in its sound palette.
There's also a darker and more overtly techno mix from Glen McArdle, but perhaps of most interest to TIWWD readers will be the rubs from Echofusion and Moojah. Echofusion's Deeper Remix is, unsurprisingly, a deep house refix and perfectly tailored for very, very late play, with one of those spoken vocals you either love or hate: "the vibe, the groove, the music… house music… this is deep house", you know the deal! Some might find that off-putting I guess but I'm a sucker for those kind of vocals so this mix is working just fine and dandy for me. And then finally, we come to Moojah's rub… a deep as in 'deeeeeeep' dub/minimal techno affair that's surprisingly upbeat while at the same time pushing the 'less is more' ethos to the max.
It's the last two rubs that are my picks, as you might have guessed, but just generally, this is one for the proverbial 'proper heads' for sure.

About: Yep, it's another gem dug up by those ever-prolific Endemic Digital boys…
Posted by Russell at 22:03