What we missed pt 2

So, continuing with last week's best-of: 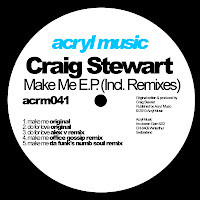 Craig Stewart
Make Me EP
Another winner out of the excellent Acryl stable. It’s perhaps a tad more ‘accessible’ than much of the Swiss imprint’s usual ultra-deep output, but only a tad – no need to run away screaming! And in any case, the Numb Soul Remix of Make Me (the lead of two tracks, presented in a total of five mixes), courtesy of label boss Da Funk, should keep the Acryl sofa-surfing faithful more than satisfied.

Out: Last week
About: Find out more about Acryl Music here 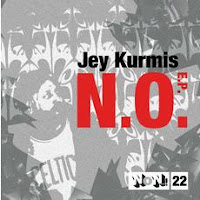 Jey Kurmis
N.O. EP
A three-tracker packed with funk-laden tech-house nuggets, of which the title track is probably the strongest, although the
slightly freakier Yoghertz gives it a run for its money.

Out: Last week
About: This comes courtesy of Wow! Records and is their 22nd release. Jey Kurmis hails from the northeast of England and is also known as Gashy. You can find him on Soundcloud.

Lisa C
Let It Go
Label manager at UKG label back in the day, Lisa C has been in and around the industry for years, also heading up the Vinyl Vixens DJ collective. She’s done some electro and UK funky stuff lately, but Let It Go is a surprisingly delicate-sounding house number, with a vocal from the Louise Rhodes/Sarah Cracknell school of thought, and Ibiza-y drums that don’t go overboard.

About: It doesn’t actually say what label this is on, which is a bit rubbish. But it is on iTunes, apparently. 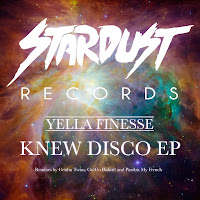 Yella Finesse
Knew Disco EP
The second-best EP title of the month (I’m not saying what the best one is… yet), albeit slightly misleading in that I’d describe its contents as disco-house rather than nu-disco. It’s pretty good though, and not as cheesy as you might fear. Go for the original if you want soaring string samples and filtered vox a-gogo, or the Pardon My French mix if you want it a bit more cut-up and jackin’.

Out: Last week
About: This is only the second release on DJ EQ’s fledgling US disco-house label Stardust Records, whose online presence at the moment seems to consist of a Facebook page and a Soundcloud page where you can currently HEAR THIS