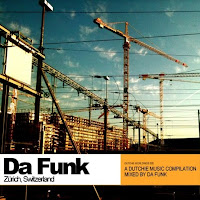 Apparently this is the fifth DJ mix comp in a series called Dutchie Worldwide, but I must confess it's the first I've seen, or heard. No matter though, cos I can think of few better places to start than with a set by Acryl Music boss Daniel 'Da Funk' Kneubühler, who here presents a 13-track journey through various shades of deep house.
With cuts from Harold Heath, Jay Tripwire and Joeski, plus Acryl faves like Stan Kolev, Timo Camillo and of course Da Funk himself, it's the proverbial 'thing that requires no brain', really. Here's a Beatport player (if it works, never posted one of these before):

and here's a link to the Da Funk website just in case the player doesn't show up in your browser for some reason.
Out: Now
About: This is on a Florida-based label called Dutchie Music - here's their MySpace and here they are on Discogs (no mention of Dutchie Worldwide 1-4, you'll notice, but I'm pretty sure it's the same label given the artists involved)
Posted by Russell at 12:53