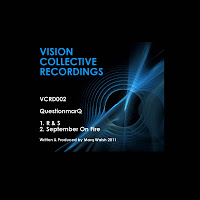 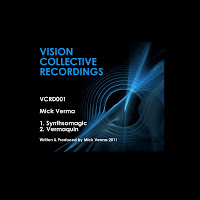 Had a couple of bits through yesterday from a brand new label over in Cork, Ireland, called Vision Collective Recordings. Both the singles they sent have been out for a little while now, but they were too good to ignore, so this is just to let everyone know about these new kids on the deep house block.

VCRD001 was Mick Verma's Synthsomagic/Vermaquin. The former is a driftaway post-club deep house excursion, with synth washes galore and a 303 bassline, while Vermaquin is a lazy, summer-sounding cut that you'd ideally hear by a poolside somwhere.

VCRD002, released just a few weeks ago, follows that with QuestionmarQ's September On Fire and R&S. September On Fire is a midtempo deep house cut with a fat, organic-sounding (emphasis on -sounding!) bassline, some lovely jazzy keys and a disembodied female voice saying "works almost instantly" – like something out of a sci-fi movie. R&S, meanwhile, is a more uptempo, techified affair and aimed straight at the dancefloor.
On this evidence, Vision Collective could be a label to keep an eye on. Keep 'em coming boys!
Out: Now
About: Find out more about this new label and the artists involved at their website.
Posted by Russell at 14:26